How does one act black while abroad? Is your hair in braids? Are you wearing wild prints? Do you say ain’t?

To me, those aren’t black things. They are just things people do but somehow, doing it makes you stand out.

I recently had a conversation with my friend about this as race is still ever prominent in today’s society. From Kanye shouting about slavery being a choice; to Trump calling countries in Africa a sh*t hole, the dialogue is something I’m aware of. I find it exhausting as a black american female but it’s even more tiring when it concerns travel.

Traveling is usually done for fun. It’s a leisure activity that is packed with new cultures, adventure and possible ways for training your brain to look at the world. It’s not supposed be stressful. Granted, when I’m on vacation I’m a bit on edge trying to stay vigilant about scammers, pickpockets and high prices. But why oh why do I need to worry about representing a race or having people mistreat me while abroad?

Now, I don’t truly worry about this but it is a thought that pops up when I notice I’m the only one in the room.

As I said, I recently had a conversation with my friend about this. I was curious to know if she felt like she needed to be on her best behavior. Her response? She said that she only ever got an inkling of that when she was in European countries but in places like the Caribbean or perhaps Africa, she felt there would be less scrutiny over her attitude and demeanor. For the most part, she felt at ease on her trips but she wanted to make sure that she didn’t give the wrong impression. It made me think whether other black travelers felt this way too. Did they feel that they had to put on a performance or be anything other than themselves?

Whenever I travel, I try to be the best me possible. I’m not worried about being watched or having someone call me out for being black. That’s totally ridiculous! And anyways, I had to get used to other people calling me an Oreo while growing up. I was told I wasn’t behaving like a black girl in my speech, what I liked to do, what I liked to watch, who I had crushes on, everything. It made me feel weird. I didn’t know how to take it but eventually, I realized that what they said didn’t matter. No one race acts in one particular way or even carries the same traits. I shouldn’t have to worry about people (black, blue, white or brown) thinking I’m living up or living down to their expectations of black people.

Last December in Morocco, I blogged that it was pretty hectic. But another thing I mentioned was that with my box braids, a lot of the locals called me a Rasta. Braids aren’t dreads and I’m not a Rasta. The point of this? I had no idea that I was being judged for my hair and that I was representing Jamaicans. I did feel that I stood out in some way but I was trying to represent, I was there to explore. I was there to see a new place through my eyes and walk the city and do whatever I felt.

Vacations are supposed to be a break from reality, but then again, you can’t escape life. Maybe you can only dodge a few everyday annoyances and thinking that you can get a true break from nonsense is a dream.

What I’m trying to say is that we aren’t all one way. We are all individual no matter the race and that people need to see past color. I’m not on my best behavior when I travel because I’m black and want to represent, I behave the way I do so that I can just leave a good impression of myself. No one else. I guess I just want others to feel the same. I want others to travel and just enjoy because traveling is fun.

Wear your hair in braids and do what’s comfortable to you is what I say. What do you guys think?

Hanging in the Easter sun in London.☀️
Cheese 🧀 photos because we finally bought a house !🏡
Is this an ad for sports wear?🤣😂
The unknown can scare the 💩 out of you. 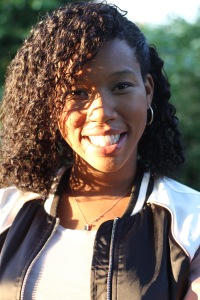 I’m Alicia, a communications specialist with an interest in travel and content creation. Follow me to see some of my videos, tips on destinations and other fun lifestyle bits.